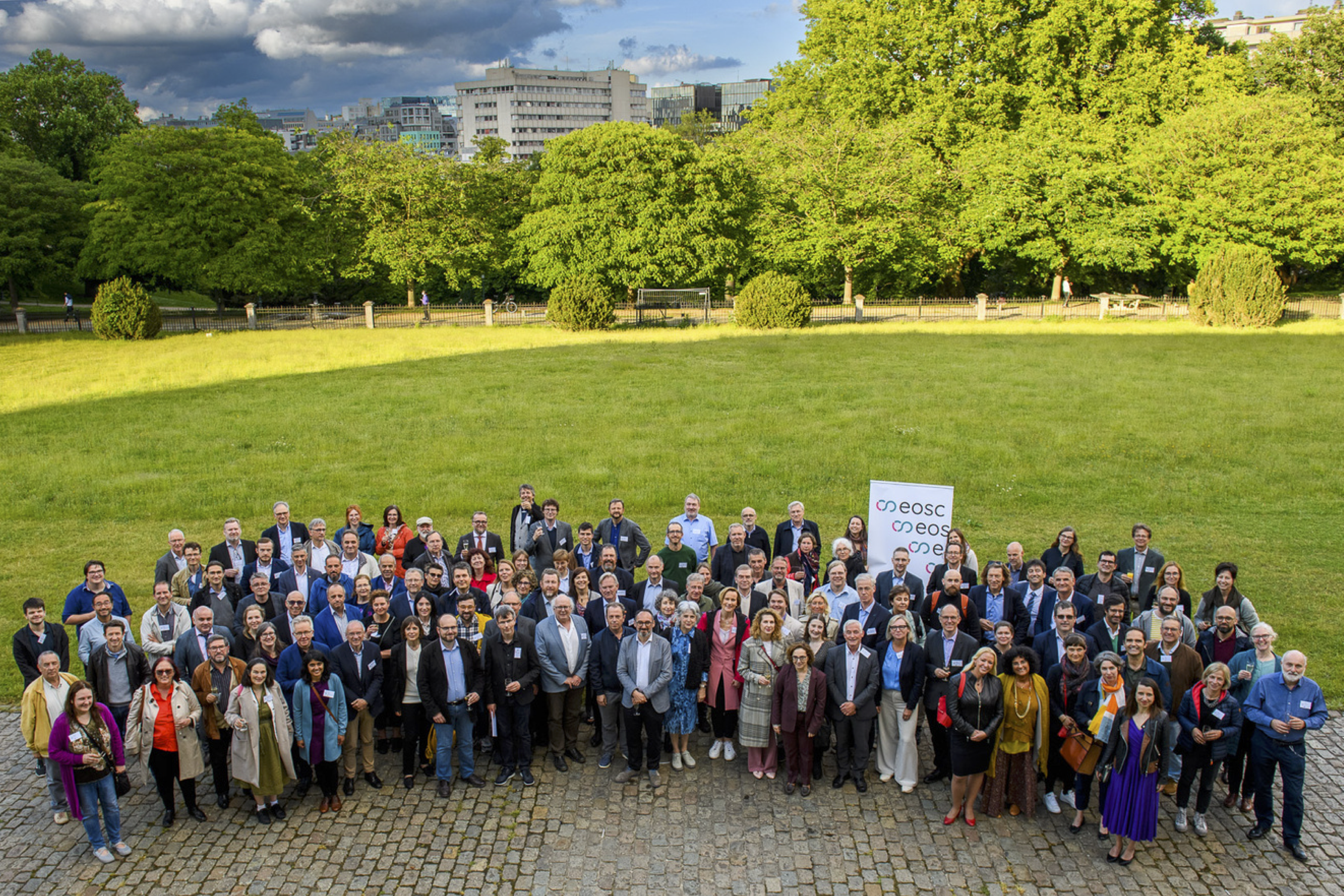 BRUSSELS—The EOSC Association’s 4th General Assembly meeting, held 24-25 May 2022, marked a significant moment in the development of the European Open Science Cloud. Welcoming more than 200 representatives of its Members and Observers to the Renaissance Hotel in Brussels, this was the Association’s first face-to-face meeting since its incorporation in July 2020. The organisation had scheduled on the first day a number of decision items to vote through, including approval of new Members and Observers and, notably, approval of the organisation’s revised Articles of Association. Above all, however, the meeting marked a pivot point between the work of the Association’s 13 Task Forces, comprised of some 400+ participants, and that of the work programmes of the EU’s nine EOSC-related Horizon Europe grant projects that will launch between June and October of this year, including the EOSC Association-coordinated EOSC Focus.

Joined under the banner of the Co-Programmed European Partnership for EOSC, the hundreds of individual contributors to the development and implementation of EOSC have been engaged in the complex process of weaving together their jointly conceived but widely distributed efforts into the common fabric that is the master plan detailed in EOSC’s Strategic Research and Innovation Agenda (SRIA) and its Multi-Annual Roadmap (MAR). These are living documents, and each of the Task Forces, together with the EOSC Association Board of Directors, continue to put in a great deal of work to refine the path to EOSC implementation. As the meeting demonstrated, translating these master documents into actions and results is being accomplished through both formal and informal processes at the European, national and institutional levels, which in turn feed back into the further development of the strategic agenda and its roadmap.

“While the in-person GA enabled us to accomplish some important housekeeping tasks, its great value is as a community forum bringing together all parties to the EOSC Partnership,” said the Association’s president, Karel Luyben, who presided over the meeting. “Made plain by the meeting is that we have a lot in motion toward the implementation of EOSC. That’s not a surprise to anyone, of course, but a key role of the EOSC Association is to help maintain a common focus for this work and to promote a coherent vision for where it is taking us.”

Day 1: The state of play

EOSC’s success in managing and leveraging the current nexus of complementary and overlapping activities is what will propel the grand initiative into its most critical stage of development—which, the meeting made clear, begins now.

The first day of the two-day meeting served to set the scene for the more action-oriented day two. Presentations included status updates from the EOSC Association (President Luyben and Secretary General Ute Gunsenheimer) and the European Commission’s DG RTD (Senior Expert Michel Schouppe, REA Call Coordinator Eleni Zervou) and DG CNECT (Programme Officer Peter Szegedi), which together gave a clear picture of the healthy and active state of the EOSC Partnership. The impressive efforts to consolidate the EOSC Association, which has only been in full operations since November last year, were detailed alongside its activities directed toward supporting the Partnership and widening the EOSC ecosystem generally.

On the Commission side of the Partnership, Schouppe highlighted the work to adopt an EOSC Monitoring Framework to gauge the successful delivery of the substantial in-kind and monetary contributions committed to by the Association’s members in its Additional Activities Plan. Major actions from the Commission in the coming months include issuing the Horizon Europe INFRAEOSC Call 2022 and DG CNECT’s public procurement of the EOSC core.

Another three key presentations from the first day included:

Notably, the first day ended with the big reveal of the new EOSC logo, which was the result of a European-wide competition. Use of the new family brand for EOSC will be rolled out together with the full co-branding guidelines over the summer. 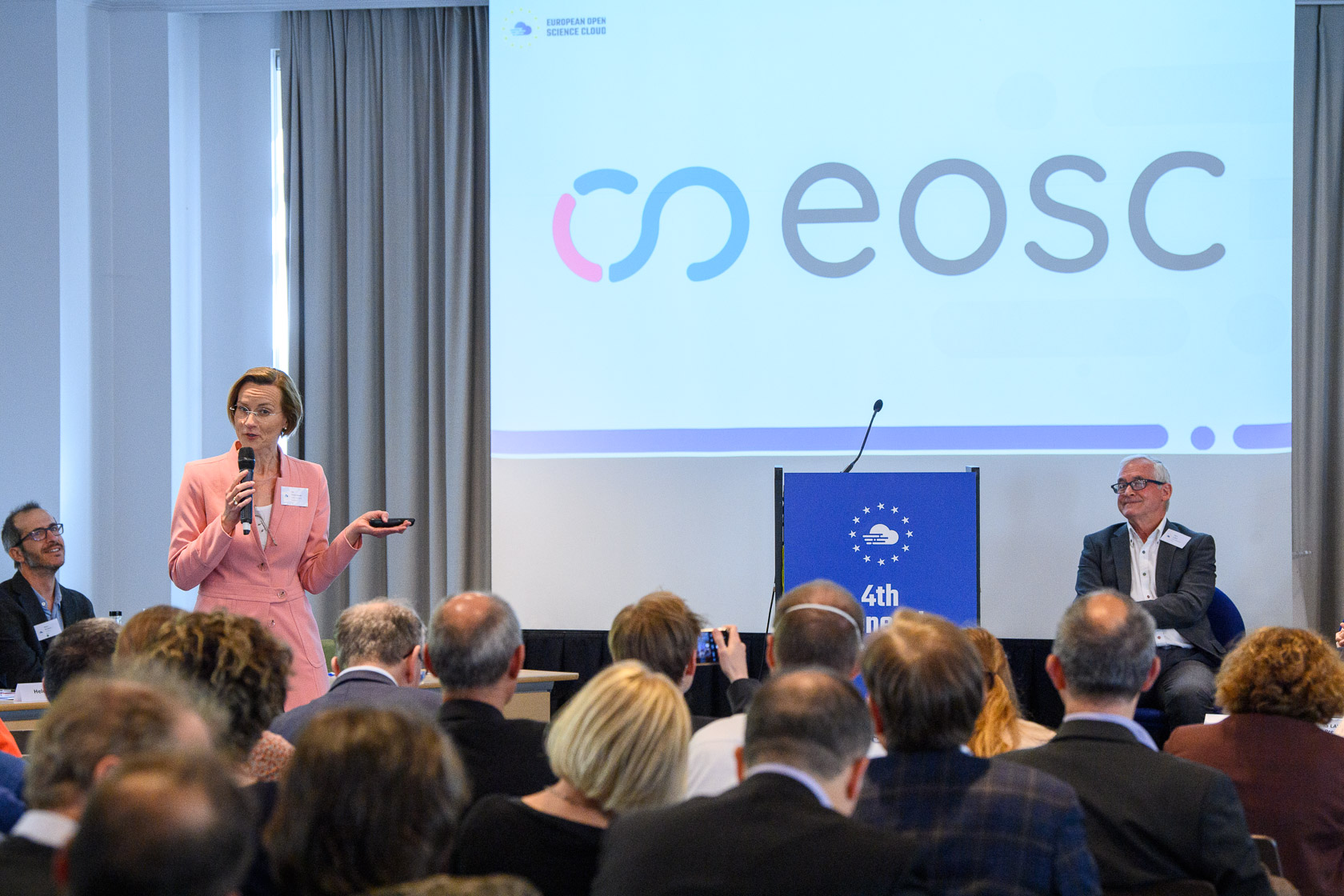 The second day of the meeting opened with a nearly two-hour session highlighting the work of the five EOSC Association Advisory Groups and their 13 Task Forces. The Task Forces are in the eighth month of their two-year mandate and, as the name suggests, are the boots on the ground helping to steer the implementation of EOSC. Here is where the delegates—most of whom are a part of one or another Task Force—received complementary first-hand reports on the many individual issues and concerns that must be addressed to build a viable EOSC. Some of these are front and centre for the immediate future—what are the valid EOSC use cases?, and what does an EOSC software developer’s career path look like?—while others are essential for EOSC’s long-term sustainability, such as the policies that will govern the use of the technology, and the funding models that will secure EOSC’s viability one, two or even three decades from now. 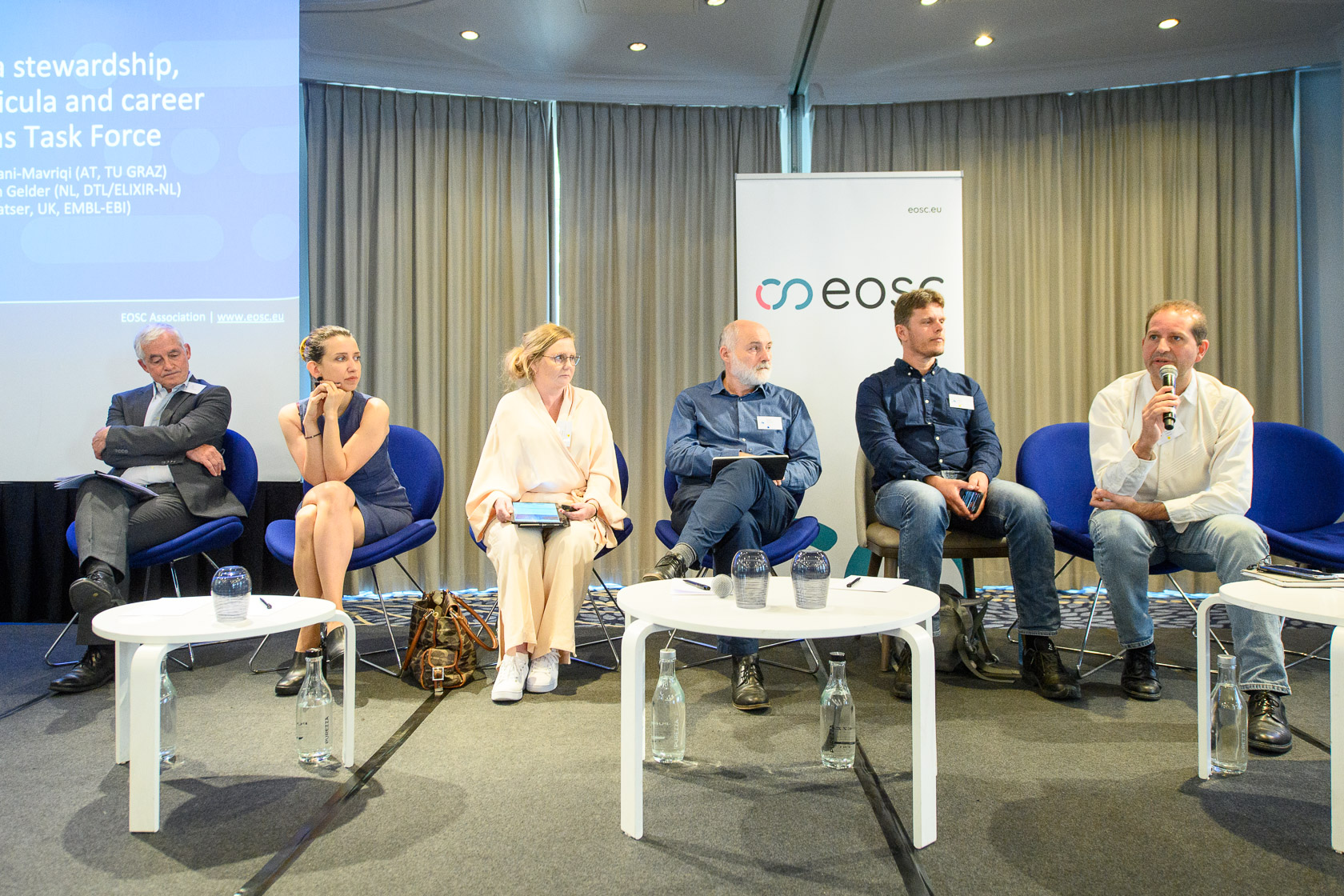 “We are building infrastructure,” Financial Sustainability Task Force Chair Jan Meijer reminded the delegates. “You measure that in decades. Like the construction of an airport, it has a long-term time horizon. Infrastructure also means it’s not just one service but a complicated collection of moving parts. In this case we have 3,500 organisations as stakeholders in this infrastructure.”

This was the cue for the next two presentations, which introduced the delegates to two major elements in the Partnership’s activities for the coming years, and which will aid in the process of implementing Task Force guidelines and recommendations.

The EOSC Partnership’s Tripartite Collaboration National Events, the first of which was held in Vienna on 23 May, are structured to bring together EOSC national actors, including ministries and EOSC Association Mandated Organisations, with the European-level actors, including the European Commission and the EOSC Steering Board. Designed to hear out the individual national and local institutional concerns, these workshops will also serve to align policies and nurture the political support within each of the Association’s Member States.

“This is the convergence of policy starting by learning from each other,” noted DG-RTD Policy Officer Thomas Neidenmark, who participated in the Vienna event. “It does not happen automatically. We need to address national specificities—how do we implement EOSC in this country.”

The meeting closed with an introduction to EOSC Focus, one of the nine three-year Horizon Europe EOSC-related projects that will launch in 2022. EOSC Focus is a Coordination and Support Action designed to keep the many ongoing and future EOSC-related projects on the SRIA track and maintain the evolutionary momentum of EOSC as a whole. The project, which begins the 1st of June, is coordinated by the EOSC Association, and its primary objective is to support the priorities of the EOSC Partnership and to facilitate the transition between the work of the Association’s Task Forces, whose mandate will sunset in autumn 2023, and the work programmes of the EU projects, which will continue in successive tranches through 2030.

“The project is there, as the name suggests, to focus activities,” said Secretary General Gunsenheimer, who is the Project Coordinator. “We don’t want to create anything new that the world doesn’t need, we are here to support the activities of the Partnership and our Task Forces in order to enable success.” 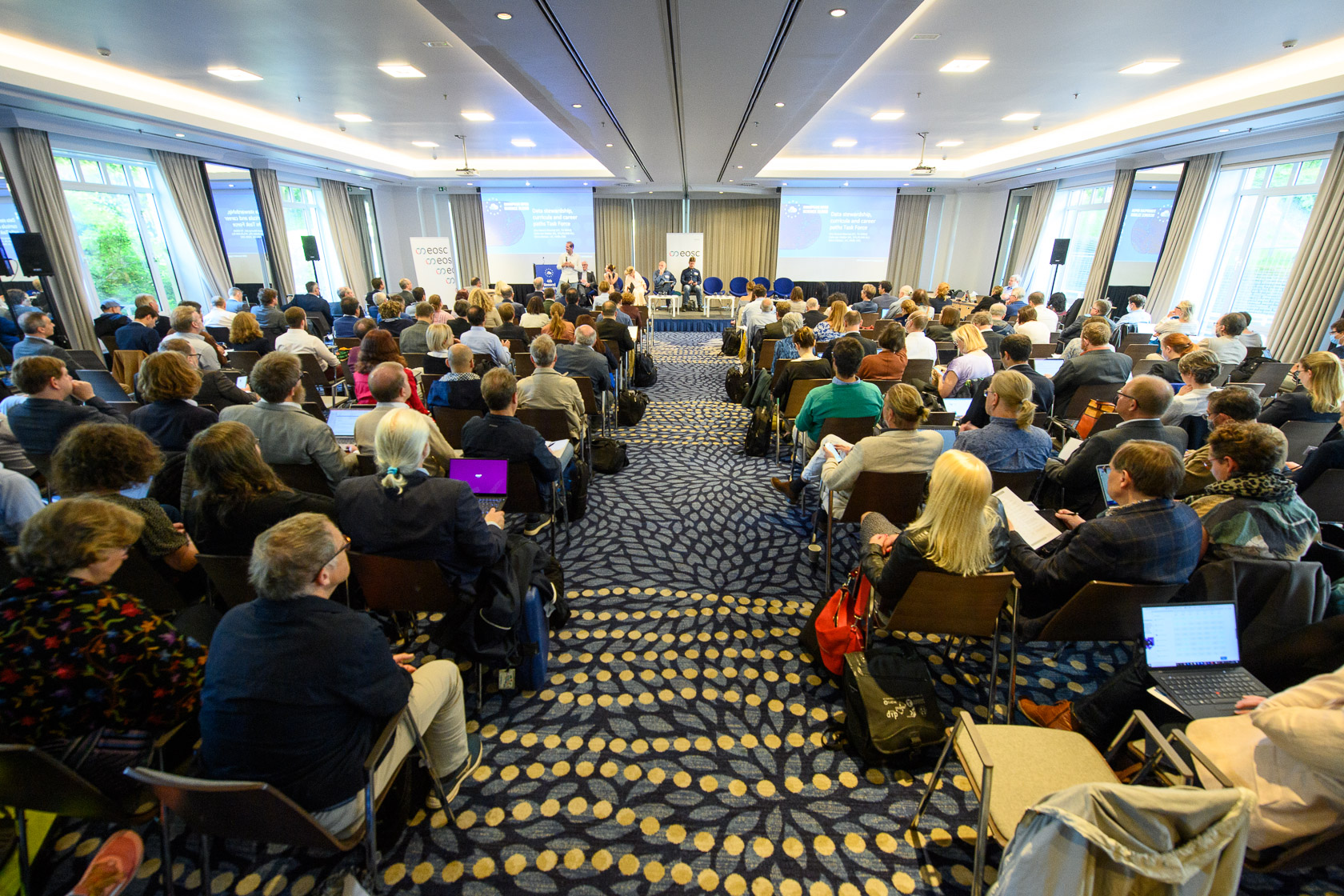 >> Check the photos of the event