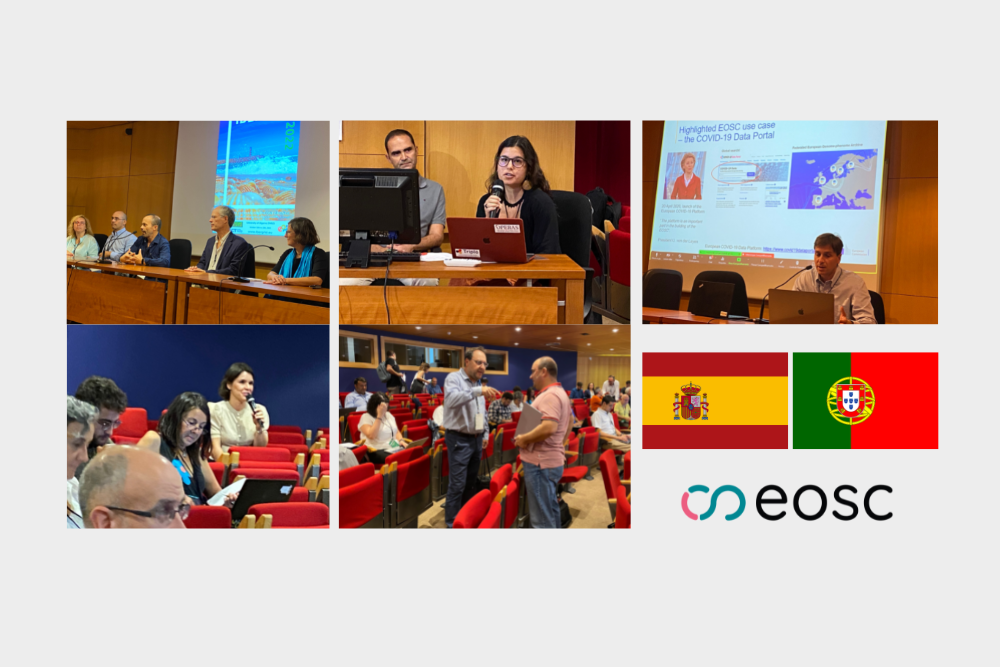 On the 10th October 2022, the first EOSC National Tripartite Event for Spain and Portugal was hosted during the 11th Iberian Grid (IBERGRID) Conference at the University of Algarve, Faro in Portugal. The event was attended by 60 representatives from researchers, e-infrastructure providers, Research Infrastructures centres and policy stakeholders in the frame of the EOSC, organised in three block sessions from setting up the EOSC scene, landscaping the EOSC community to implementing the EOSC.

Setting up the EOSC Scene

The opening session was focused on how EOSC is structured and governed, starting with welcoming presentations from EOSC-A Mandated Organisations of Spain by Isabel Diaz (CSIC) and Portugal by João Nuno Ferreira (FCT).

Ignacio Blanquer, from EOSC-A Board of Directors, introduced the tripartite collaboration and mentioned the need to have a multi-stakeholderism approach requiring open and FAIR principles at the centre, a cross-cutting and a key priority for research and innovation. EOSC must be pushed from the national level and the commitment to ERA action 1 (Open Science) is necessary but must be followed by concrete implementation strategies for EOSC, especially at the national level. 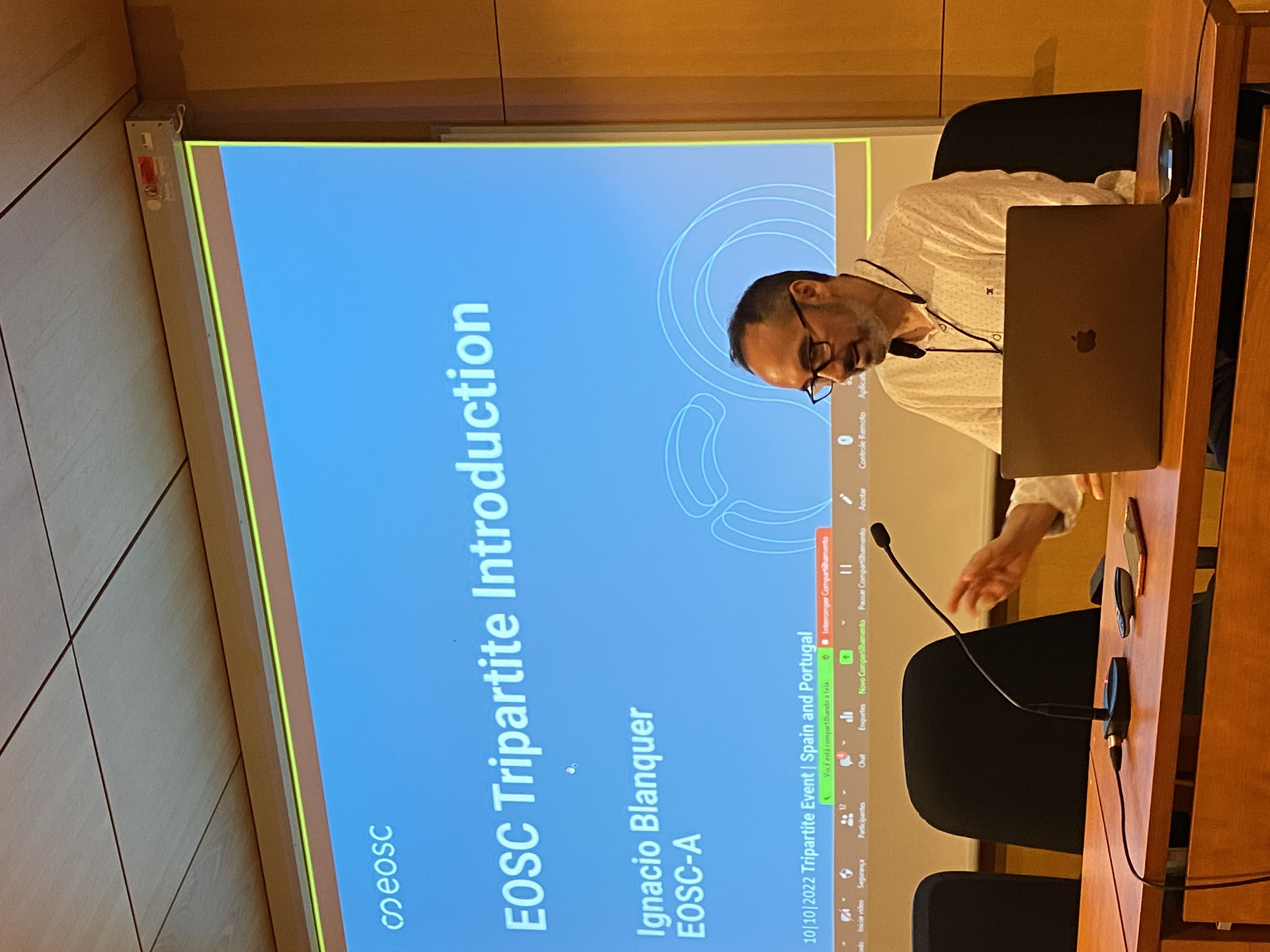 The tripartite governance reflects the complexity of the challenges to be addressed, and the EOSC Steering Board, as mentioned by Joao Nuno Ferreira, “aims to bring together and align as much as possible the policies and decisions on Open Science and EOSC at the national level.”

Javier Albacete from the European Commission stressed that to “foster the paradigm shift that will make Open Science the new normal, we need to make it required, rewarding, normative, easy and possible,” but work is needed across research communities and infrastructures on raising awareness. A specific mention was made to the conditions established in Horizon Europe, explaining the requirements related to open science and the importance of cooperation with EOSC-A to avoid duplication, identify opportunities and benefit from previous development.

Then thematic cluster projects based on the ESFRIs (European Strategy Forum on Research Infrastructures) represented multidisciplinary research communities. Ranging from biomedicine and life science, social science, environment science, astronomy and astrophysics to photon and neutron science, the main ESFRI projects such as EOSC-Life, SSHOC, ENVRI-FAIR, ESCAPE, PaNOSC presented their contributions to the integration and consolidation of thematic e-infrastructure platforms in preparation for connecting them to EOSC. 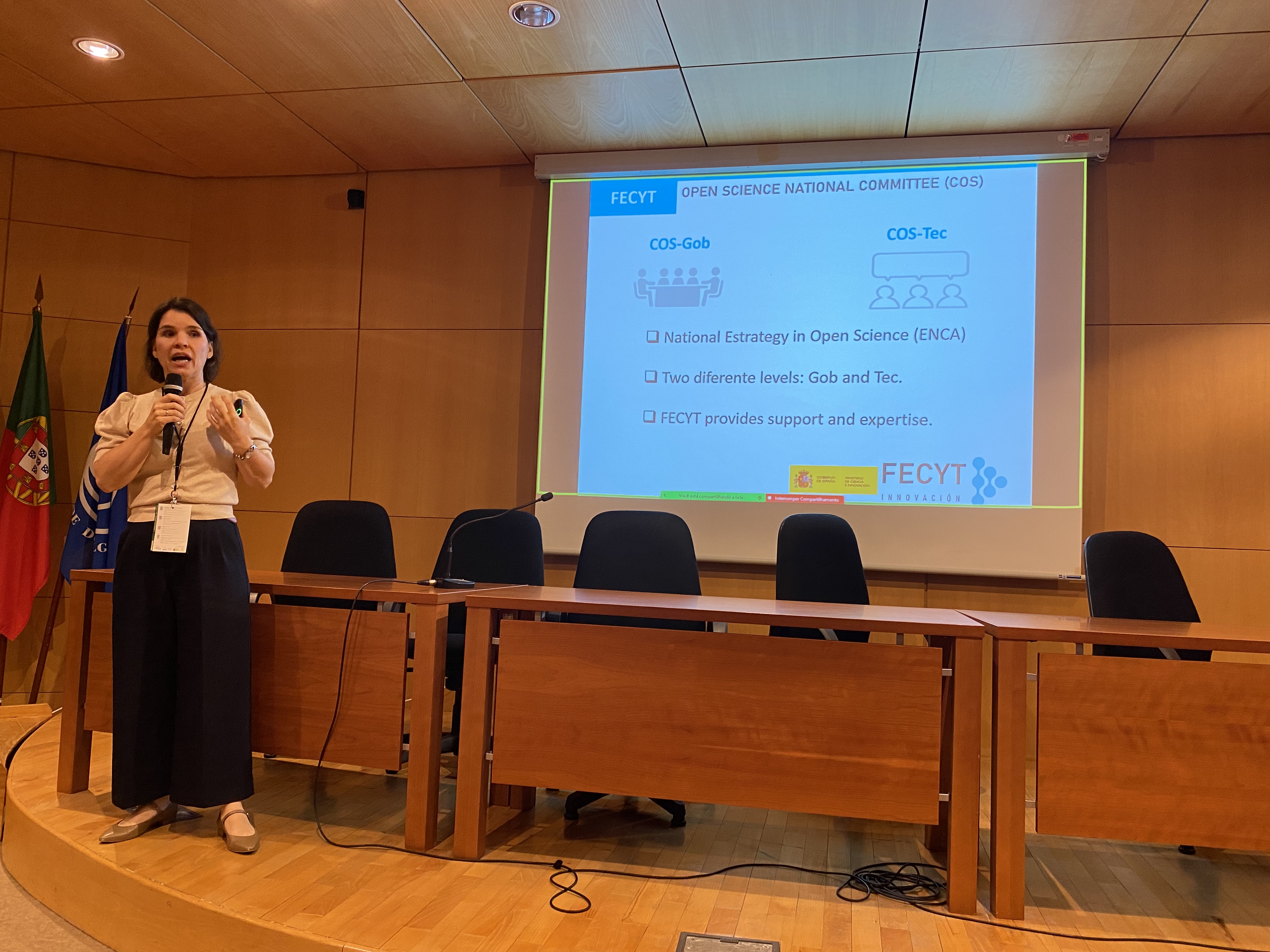 The third session included initiatives and projects dedicated to the implementation of EOSC. Starting with active Spanish and Portuguese participations in EOSC-A Task Forces, a wide variety of expertise was represented in five Advisory Groups: Implementation of EOSC, Metadata and Data Quality, Research Careers and Curricula, Sustaining EOSC and Technical Challenges on EOSC.

At the national level data infrastructures are represented by the Spanish Network for Supercomputing (RES) in Spain and the National Network of Advanced Computing (RNCA) in Portugal, respectively.  Both national initiatives demonstrated their technological advancement and collaboration within the national network and as well as with the EuroHPC.  In relation to the national data infrastructures, the INFRAEOSC-5B project EOSC Synergy was showcased for expanding the capacity at the Research Infrastructure level by integrating services and resources, being coordinated by the Spanish mandated organization CSIC and participated by the Portuguese mandated organization FCT.

In addition, among the new INFRAEOSC projects that have started this year, two of them coordinated by Spanish stakeholders were highlighted for taking the lead in each project AI4EOSC by CSIC and EOSC4Cancer by BSC.  Spanish stakeholders also participate in other new INFRAEOSC projects, FAIR-IMPACT and Skills4EOSC, in alignment with the implementation of FAIR principles and Open Science policies.  Finally, the importance of Open Science for research, development and innovation was emphasised by the three initiatives FECYT, FCT, and SOMMa.

The closing session reflected an intense day of knowledge sharing and interaction with a global picture of several EOSC projects and Open Science Initiatives in which organisations from both countries participate. The event aimed to showcase success stories and best practices, raise awareness of the EOSC concept, share training opportunities, identify collaborations, and reinforce the Spanish and Portuguese EOSC ecosystem. The event was highly appreciated by the community, who found enormous value in the information shared to start up collaborations.